This year’s canoe, named Borealis, will feature a snowy white exterior and an ocean blue interior, said project manager Jerry Ding. Along the bottom, there will be 54 raised icebergs, some with polar bear paw prints, and Arctic animals, such as whales and a seal. The two bulkheads, meanwhile, will be dark violet with light green streaks that resemble the northern lights.

“We understand that only the fittest and strongest species are able to survive the extreme Arctic climate,” Ding said. “They’ve evolved over millions of years to settle in the polar region. We want to have the same mentality and keep improving, evolving, and pushing ourselves to the limits to achieve further success in the competition.”

“We made an effort to reduce, reuse, and recycle materials with our project this year, and we want to inspire others to do the same,” Ding said. 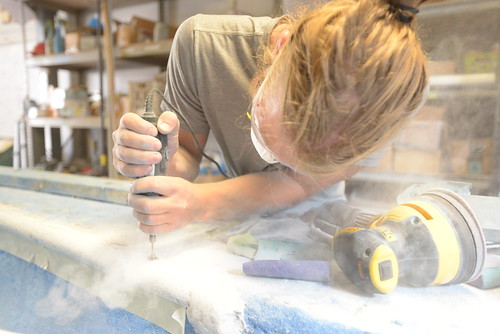 The team recently began sanding their canoe, which the team it will take to CSU Fullerton April 1-4 for this year’s regional competition.

While Cal Poly finished second in the nation last year, that was actually a letdown for a team that had won the previous two championships and three others from 2010-2012.

“We learned that although our team has been one of the strongest title contenders, other teams are bettering themselves quickly, especially in the oral presentation and design paper categories,” Ding said. “If we want to make a comeback, we need to improve in all four areas because the overall score is what ultimately matters.”

A regional win would lead to nationals at the University of Wisconsin Madison, June 13-15.

The team plans to display the canoe on the Cal Poly campus later in June.